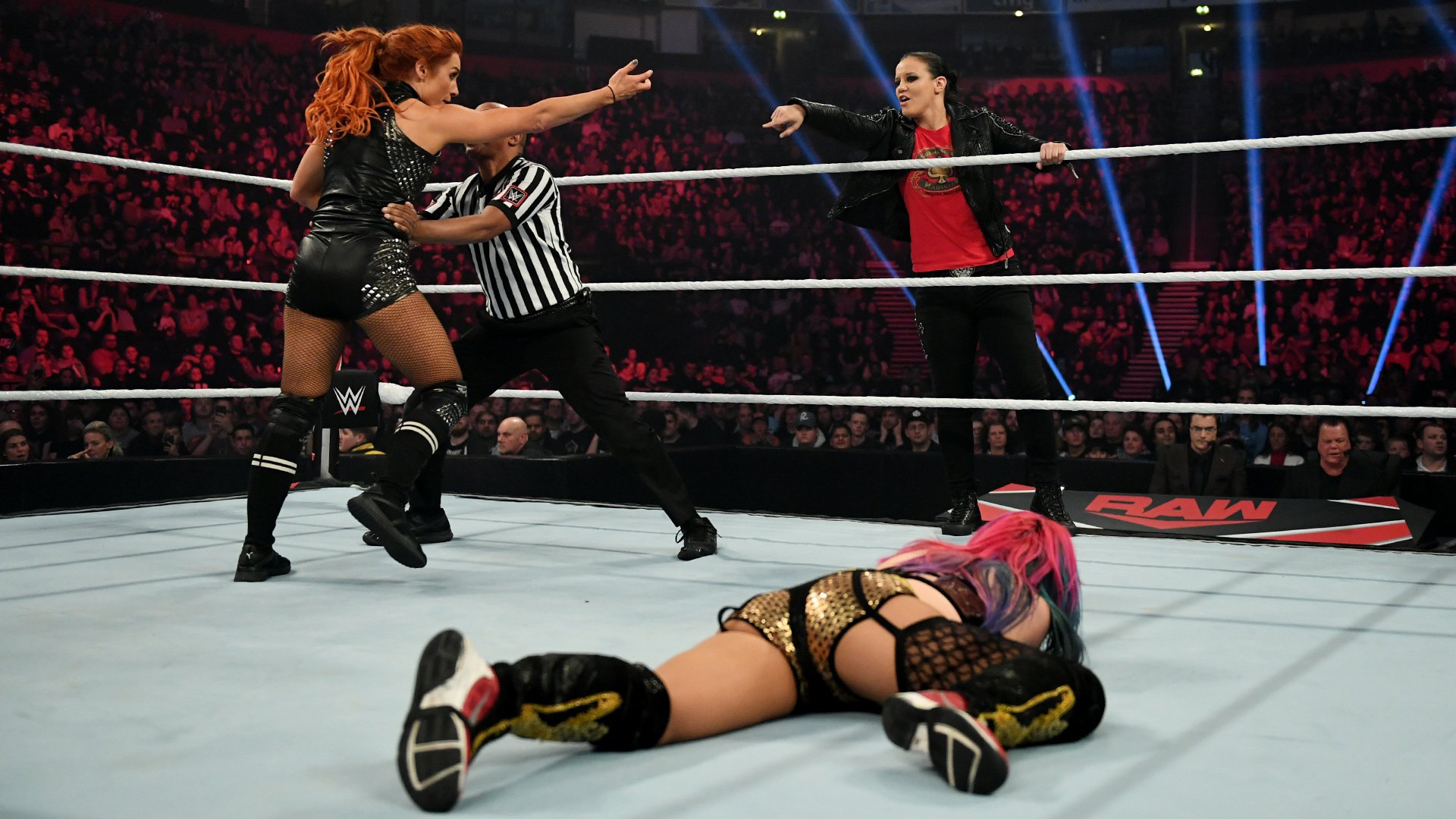 MANCHESTER, U.K. — It would have been ironic for Becky Lynch to reclaim the Becky Two Belts mantle by teaming with Charlotte Flair — the woman she won one of said belts from in the first place — against The Kabuki Warriors. Alas, the pair’s bid for Asuka & Kairi Sane’s titles was derailed by a pair of women with “belts” of their own, both of whom have a bone to pick with The Man heading into Survivor Series.

Those individuals would be NXT Women’s Champion Shayna Baszler and SmackDown Women’s Champion Bayley, whose appearances derailed what had been an overwhelmingly promising display by The Man and The Queen. Baszler struck first, clambering onto the apron during the deciding moments in an attempt to get Lynch’s attention. Bayley ambushed her from behind, and Asuka capitalized on the commotion by rolling up Becky for the pinfall.

The aftermath was similarly chaotic, and it may have changed the complexion of the upcoming Triple Threat Match to boot. Baszler quickly melted back into the audience, but The Man’s attempt to get the last word was waylaid by Bayley, who attacked the Raw Women’s Champion from behind and threw her into the barricade. Becky and Shayna have been laser-focused on one another heading into WWE’s Fall Classic, but this was a harsh reminder that they ignore the former hugger at their own peril. 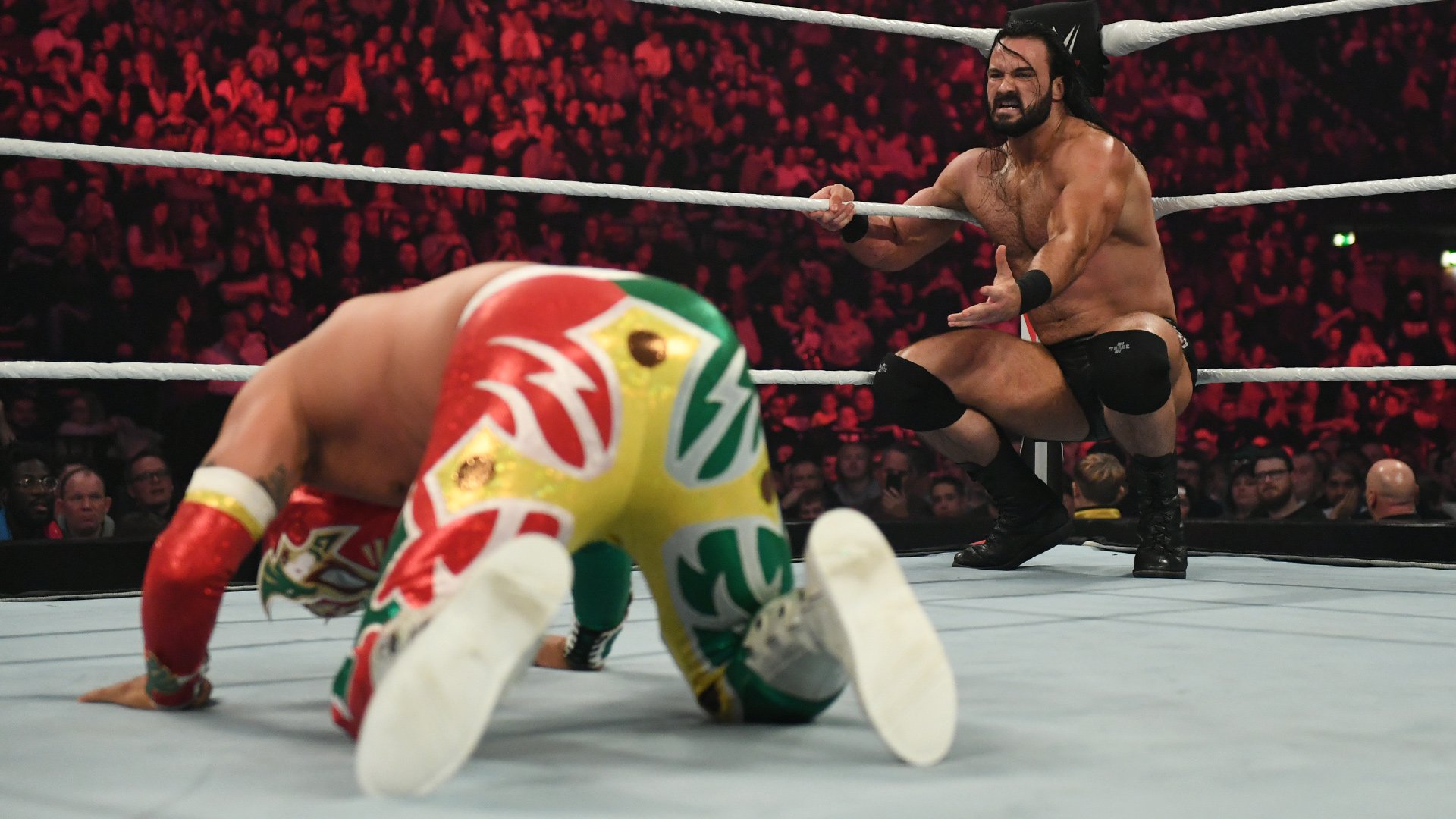 Sin Cara is nothing if not persistent, but after a loss to Drew McIntyre, the former NXT Tag Team Champion’s path back to the winners’ circle is looking thornier than ever. The International Sensation realized that he needed to go big after dropping three straight to Andrade, and he took to the air early and often against the towering McIntyre, who was caught shockingly flatfooted by his opponent’s go-for-broke strategy.

But McIntyre, who seems to be as thorough a scouter as he claims to be, dropped Sin Cara out of the air with a Glasgow Kiss headbutt and went to work from there. Sin Cara’s brief, last-minute rally was summarily snuffed out with a powerbomb to the outside, and the match ended shortly thereafter with a bulldozing Claymore. 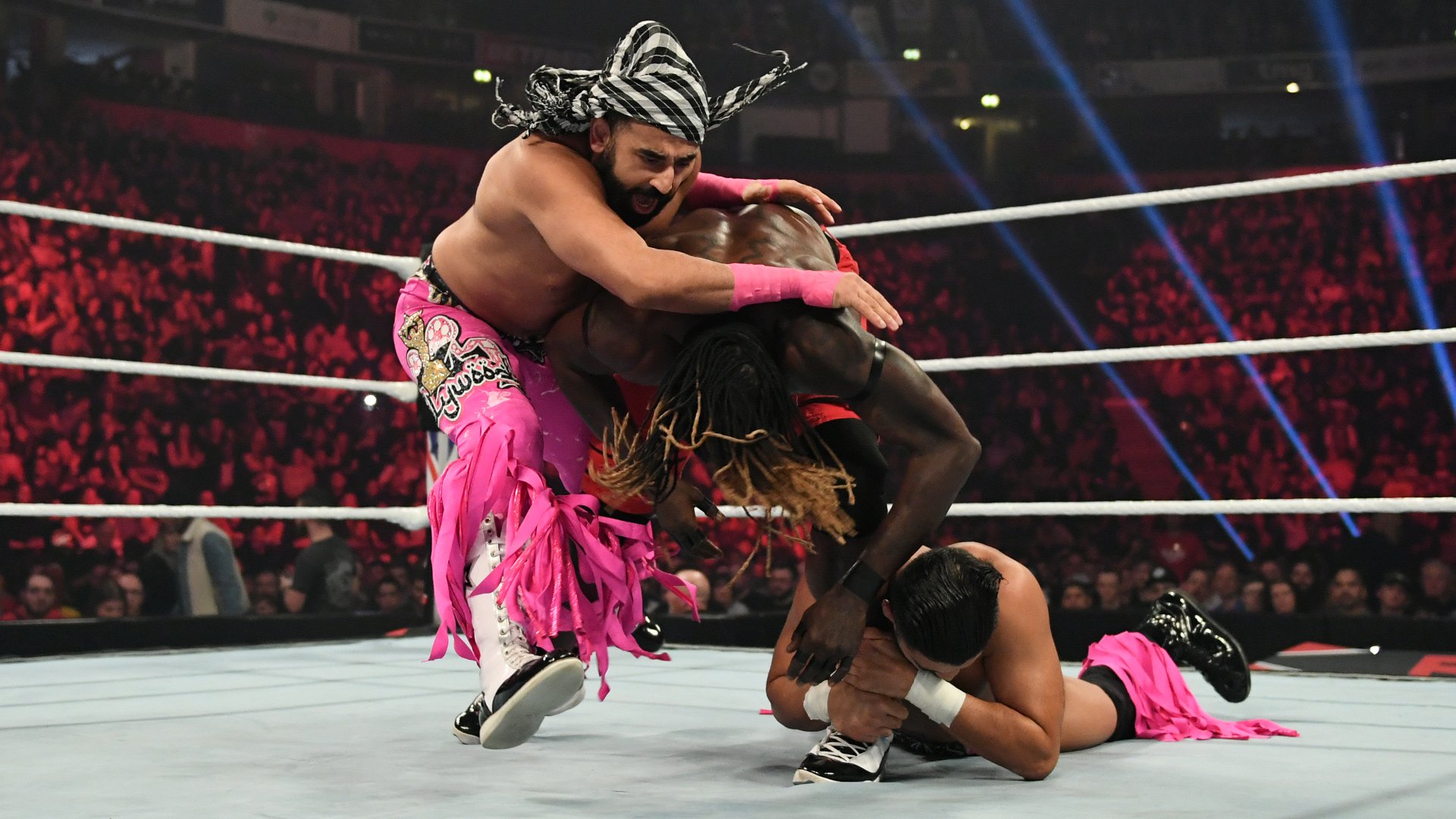 What would it take for R-Truth to simply decide the 24/7 Championship isn’t worth it? We may have found the answer.

No, it’s not Samir Singh himself, who only agreed to defend his title in a Handicap Match that teamed him with brother Sunil. It’s not even the prospect of another wild goose chase, as the Singhs bailed on the match early, and Truth hoofed it back to the locker room in pursuit of his prize. It was, however, Erick Rowan, who the Singhs ran afoul of and who Truth decided he wanted no part of, leaving the champion and his brother to contend with the bearded menace by themselves. 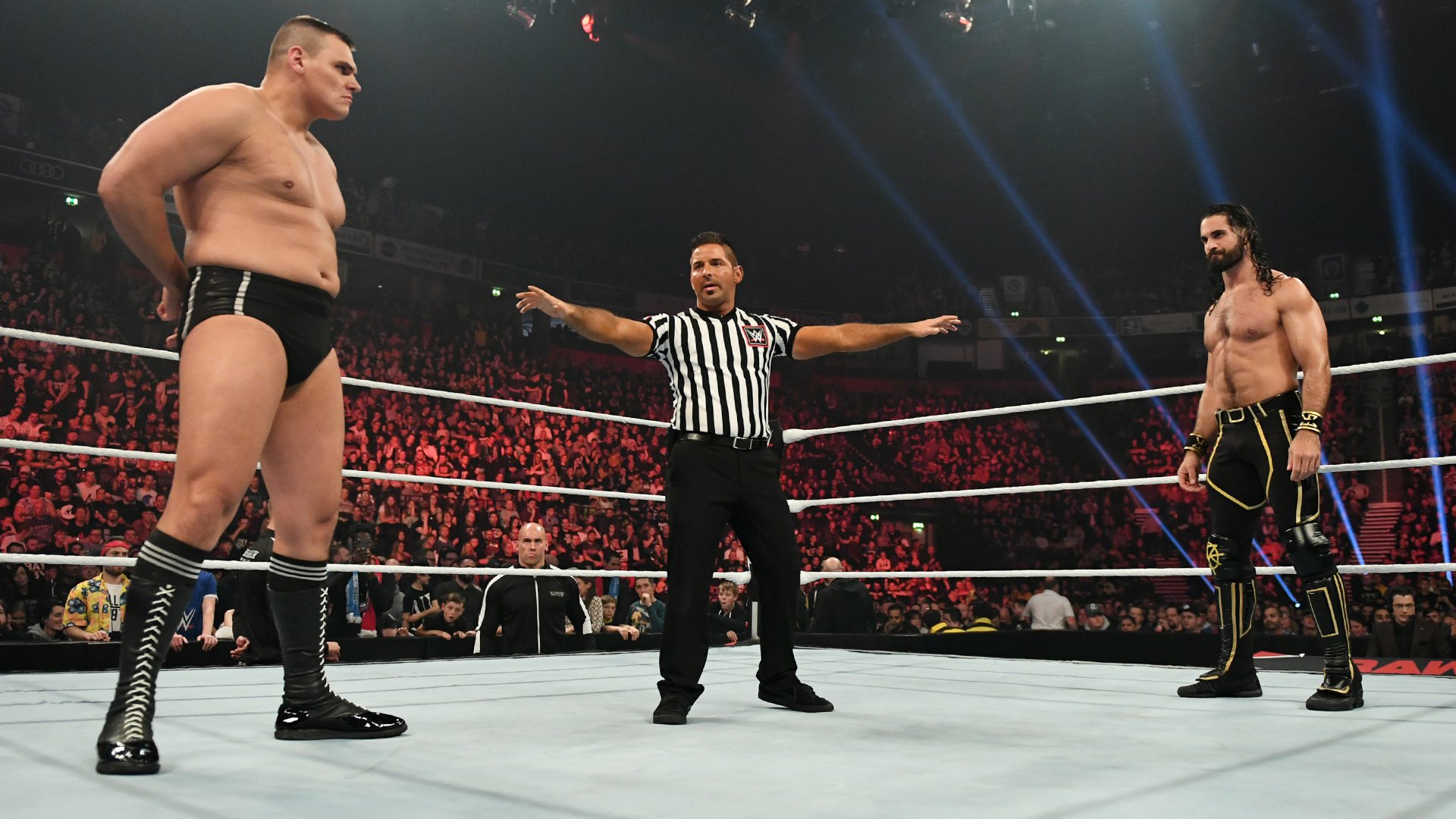 Is it possible to find the reset button you need and bite off more than you can chew at the same time? Seth Rollins might have done just that. After issuing an open challenge to “The United Kingdom’s best,” Rollins was met by none other than WALTER, the imposing WWE United Kingdom Champion and ringleader of Imperium, the straight-backed squad from NXT UK.

The arrival of The Ring General certainly provided a platform for Rollins — the sole announced member of the Men’s Survivor Series Match thus far — to tap into the old in-ring magic that shot him to the moon in the first place. But despite The Beastslayer’s passing familiarity with Imperium as a result of their SmackDown ambush, he found himself waylaid by WALTER all the same. Mere minutes had passed before Rollins’ chest was turned to ground chuck by the Austrian’s signature knife-edge chops, and the former Universal Champion was ambushed by Imperium after he began to rally.

Luckily, Rollins had some allies in the building who were willing to act as equalizers. In a display of Raw solidarity, The Street Profits and Kevin Owens quickly came to Rollins’ rescue to even the odds, and their arrival forced Imperium from the ring … at least momentarily, until the scrum was reconfigured into an 8-Man Tag Team Match. 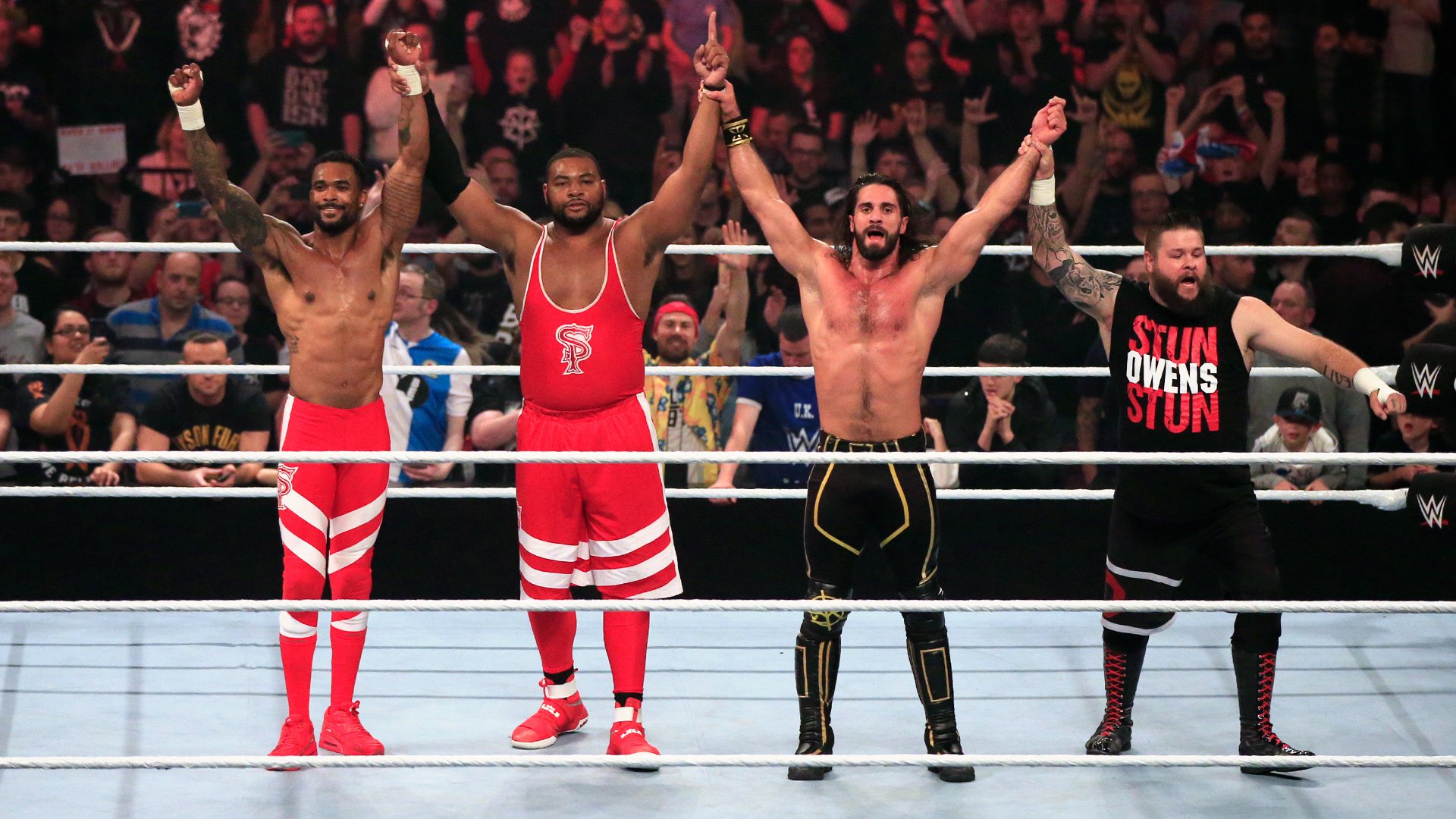 Momentum is somewhat vague when it comes to a big match like Survivor Series, but there’s certainly no disputing that Raw and Seth Rollins have a lot more wind in their sails following the Eight-Man Tag Team victory over NXT UK’s Imperium in Manchester.

For one, you can basically count collective defeats of WALTER, Alexander Wolfe, Marcel Barthel & Fabian Aichner on one hand, so beating them is always a big deal. But, more importantly, the victory was a true team effort on behalf of Rollins and his partners and a sign of what teamwork can accomplish in the face of an enemy that believes wholeheartedly in the cause.

It took a long time to get that way. The Beastslayer insisted on shouldering the majority of the burden against Imperium and was summarily brutalized by WALTER, who made a concerted effort to cave in Rollins’ chest cavity with chops and clubbing blows from behind. Some last-minute saves by Kevin Owens and The Street Profits threw Imperium’s plan into chaos and allowed Raw to rally. WALTER was finally downed by a suicide-dive and plancha one-two from Rollins and Montez Ford, Barthel was sent tumbling out of the ring with a Stunner from Owens, and Rollins finished things off with a Stomp to Wolfe.

In the grand scheme of things, it was a minor skirmish, as NXT UK isn’t yet involved in Survivor Series. But the win was a key blueprint nonetheless that the rest of the locker room would be wise to follow. If Raw is going to survive NXT — foreign or domestic — they’ll have to do it together. 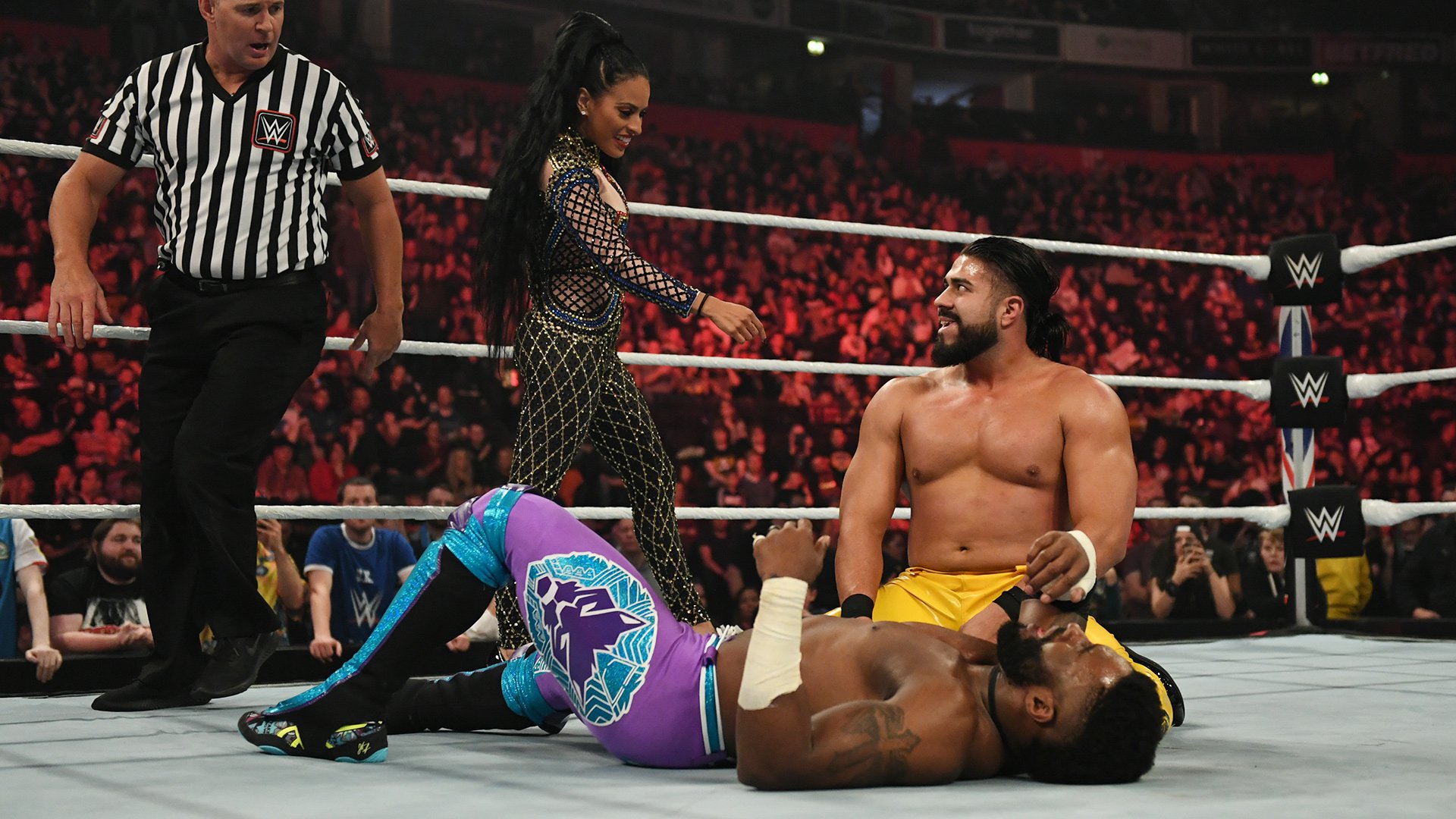 Andrade’s time on Raw has largely been defined by a rivalry with Sin Cara, but this week provided the WWE Universe with a wider glimpse of what the former NXT Champion is capable of. Facing Cedric Alexander, Andrade delivered a nearly perfect performance, cutting off most of the former Cruiserweight Champion’s offense mid-stream and taking advantage of a timely Zelina Vega distraction to finish the match with an elbow to the jaw and Hammerlock DDT.

Lana drops bombshell to lure Rusev into a trap 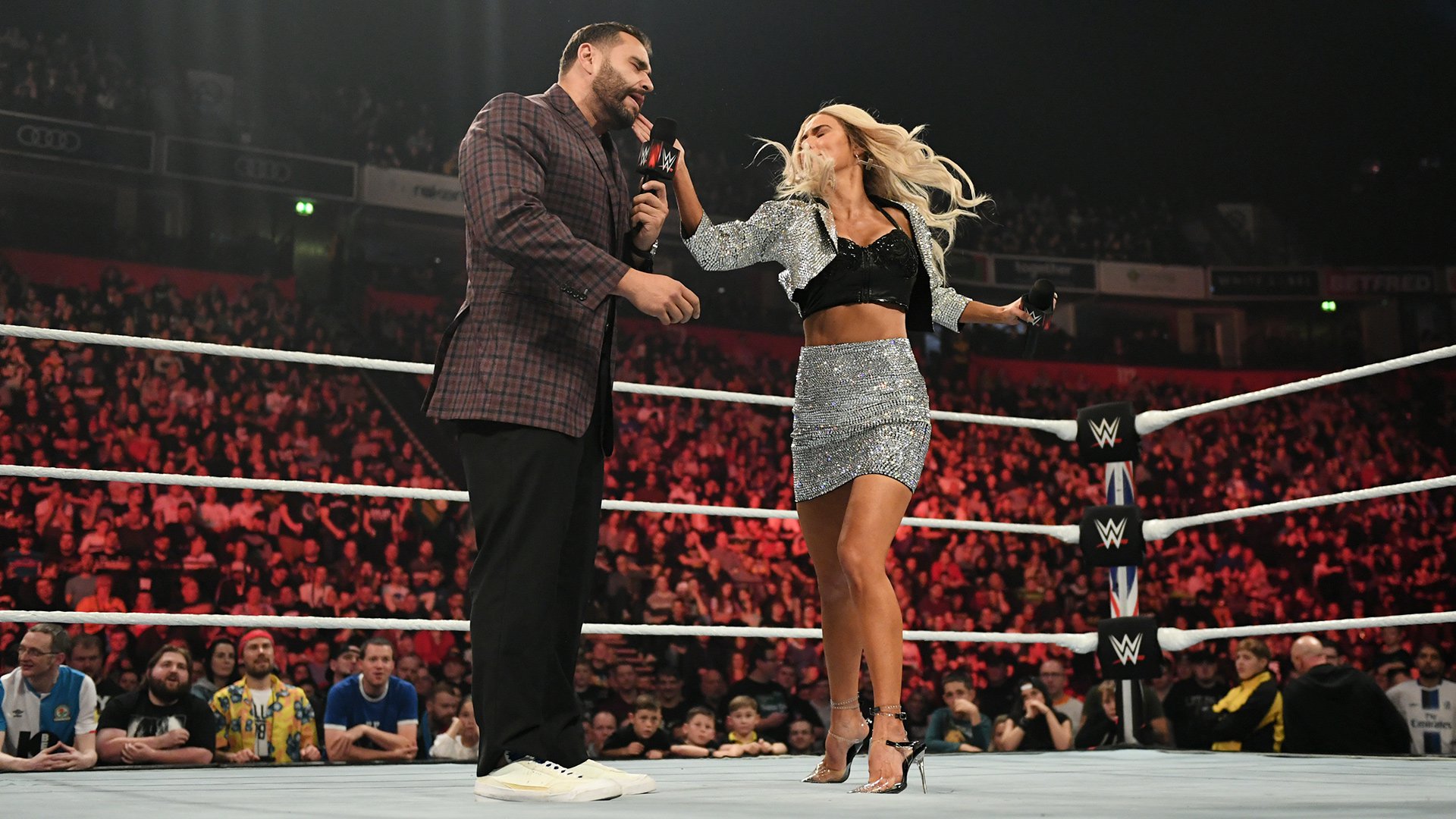 The tangled web of Rusev, Lana and Bobby Lashley became even knottier on Monday when The Ravishing Russian made good on her promise of a “shocking confession” with the biggest bombshell of them all: She’s pregnant, and thanks to some quick math, she’s sure it’s Rusev’s.

The Bulgarian Brute was strangely nonplussed as he tried to calmly sort through Lana’s various, increasingly furious stories about recent events until she slapped him across the face multiple times. That’s when Lashley made his entrance, ambushing Rusev after Lana incapacitated The Super Athlete by raking him across the eyes. And, to top it off, Lana seemingly implied the whole thing had been a ruse when she locked lips with Lashley once again at the top of the ramp. The twists and turns mount, but the ending remains the same — at least until Rusev is forced to reclaim the narrative.

What’s Erick Rowan carrying around under that bag? 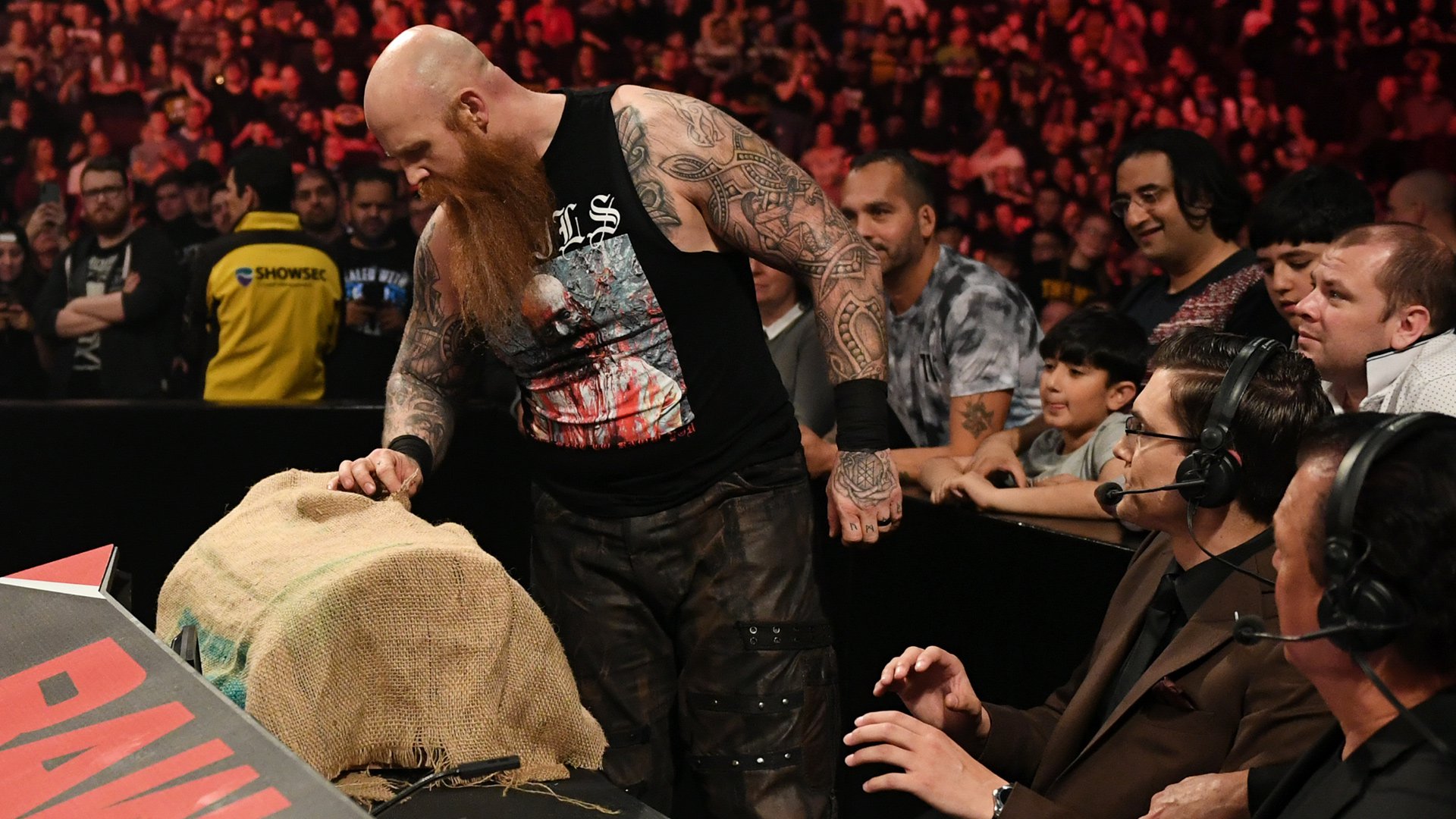 Whether Erick Rowan wanted to wn the 24/7 Championship from The Singh Brothers is a question that remains unanswered. He certainly didn’t have the title when he came out for what turned out to be a nasty, brutish and short evisceration against a local named Soner Dursun. But Rowan’s championship aspirations weren’t the only unsolved mystery of the evening; the former Tag Team Champion came to the ring with something hidden under a burlap sack that he left on the commentary table — much to the chagrin of the announce team. After steamrolling his overmatched opponent, Rowan took the cage with him when he left, without so much as a hint of what might be inside. 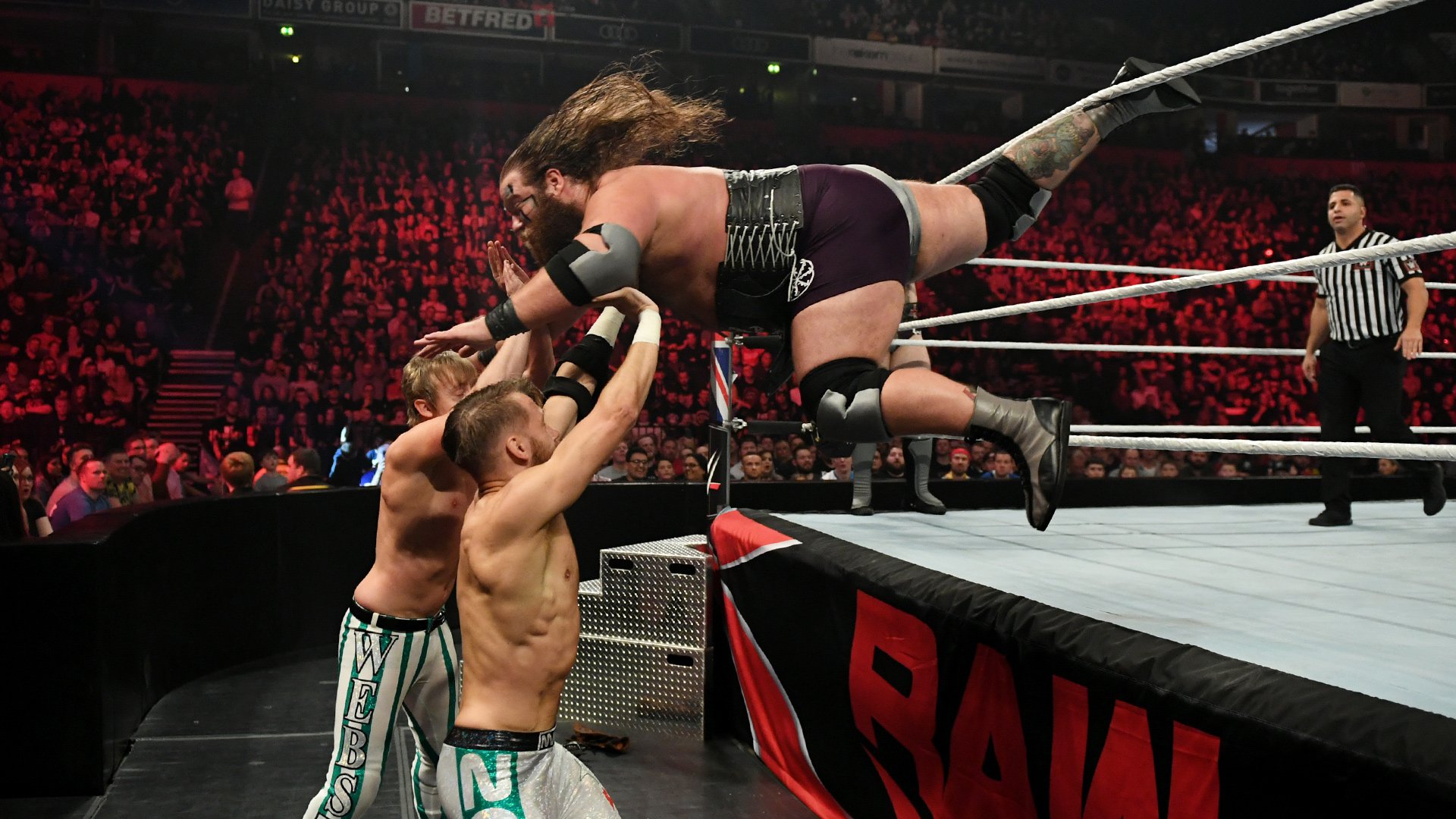 The eccentric duo from across the pond actually scored some points against Erik & Ivar on the strength of their speed, but an incensed Erik turned on the jets after some early embarrassment and almost singlehandedly turned the tide. Andrews bravely mounted a last stand, though his speed carried him headlong into the Viking Experience and an emphatic three-count. One might have thought the prospect of challenging Superstars from foreign brands might be too tall a task for The Viking Raiders. Clearly that’s not the case. NXT, SmackDown, NXT UK? It’s all the same to them.

Carrillo pins Styles as tensions flare between Orton and Ricochet 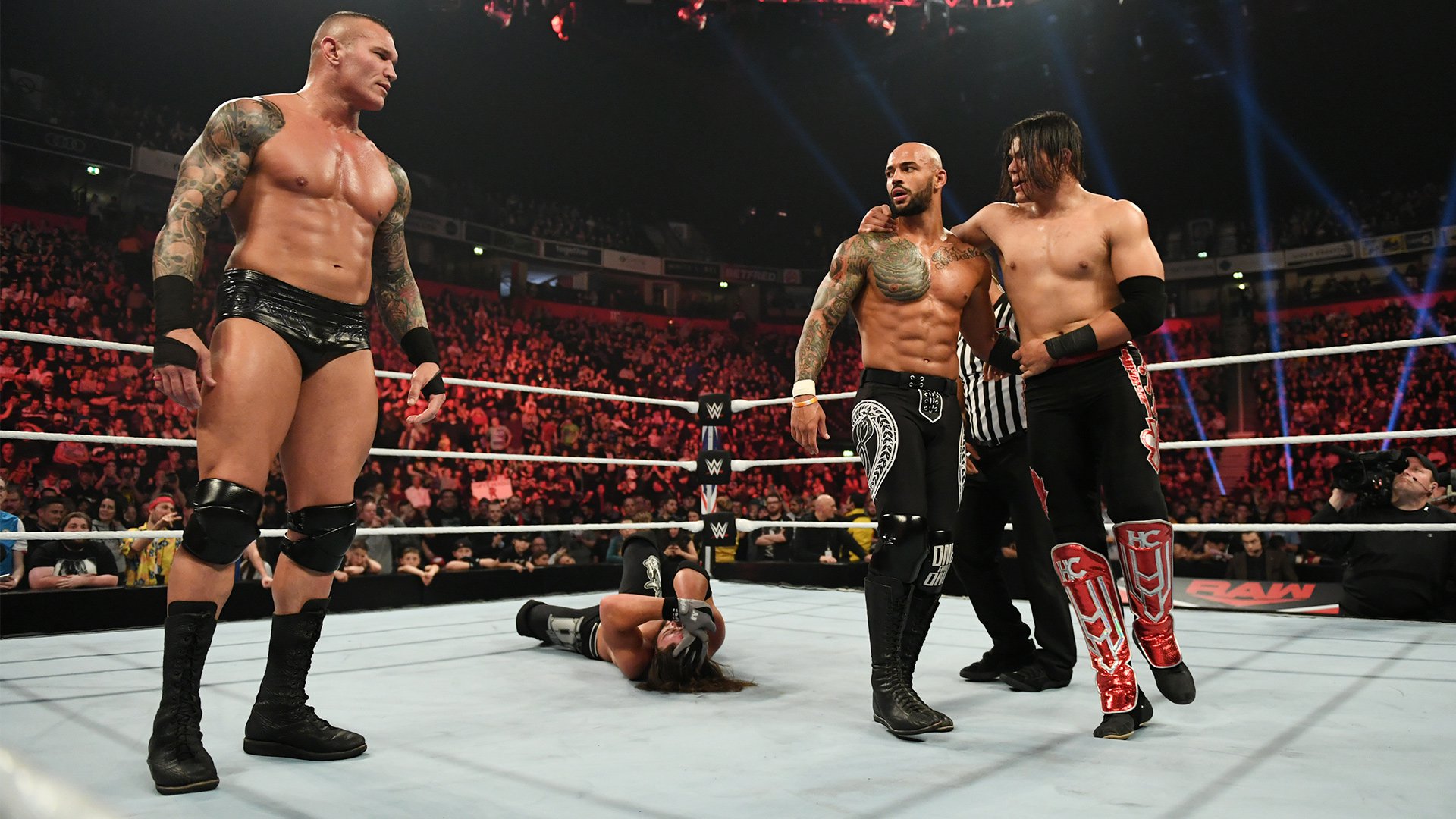 The good news first: Humberto Carrillo finally got his man. The talented newcomer pinned AJ Styles in Raw’s main event, a Six-Man Tag Team Match that pitted Carrillo, Randy Orton & Ricochet against the full-strength O.C in a match that stemmed from a backstage confrontation earlier in the night. The bad news is that the rest of Carrillo’s team was … not quite as on top of their game as Carrillo was.

You see, Orton and Ricochet don’t like each other very much. Dishing out an RKO doesn’t exactly endear you to somebody, and despite The Viper’s insistence that he can be trusted, Ricochet has clearly watched more than enough Jake “The Snake” matches to know that you can only place so much faith in a serpent. So, the match was full of several passive-aggressive snits and maybe-kind-of-accidental collisions between the two that threatened to derail things from the jump.

The tension came to a head when Orton found himself alone with Styles and Ricochet, clearly conflicted as to which Superstar he should sink his teeth into. He ultimately struck Styles with the RKO and tagged in Carrillo to score the pin with a moonsault, though he saved his most ominous message for Ricochet after the match: “I do what I want, when I want, wherever I want.” With both Superstars on Team Raw for Survivor Series, it’s fair to say Ricochet is only safe as long Randy Orton needs him to be. That gives him two weeks. The second that time is over, it’s anybody’s guess what happens next.