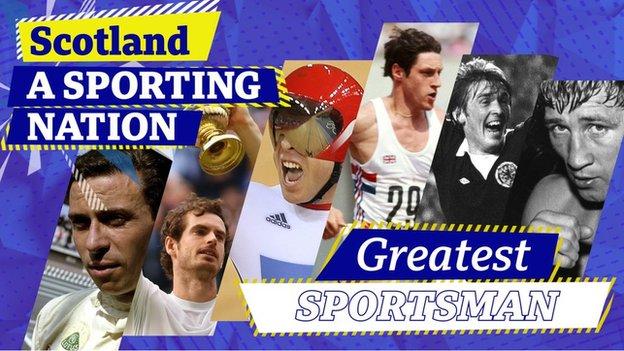 We asked you to tell us who Scotland’s greatest sportsman is and thousands of you answered the call.

And after a hard-fought contest, we can declare Andy Murray as the man you believe to be the best of the best.

Murray name is synonymous with Scottish sport in the 21st century. Despite the misfortune of having to share the golden years of his career with three of the greatest tennis players ever in Roger Federer, Rafael Nadal and Novak Djokovic, he has enjoyed remarkable success.

He has won three grand slams, made the final of eight others, and lost in semi-finals on another 10 occasions – five of those defeats coming against Nadal, two against Djokovic and one against Federer.

In 2012, he became the first British player to win the US Open since 1936. The following year, he became the first to win Wimbledon since the same year, before repeating the feat in 2016. He’s been world number one, he has two Olympic gold medals, a Davis Cup, and 46 titles in total.

You can only imagine how many he might have won had he not been born into the most competitive era of all time.

Across the span of Hoy’s illustrious career, he won six Olympic golds – no Briton in history has more. He has 11 World Championship golds to his name, as well as two Commonwealth golds.

After winning silver in his first Olympics, Hoy added his first gold in Athens in 2004, but it would be in 2008 where he would etch his name in the history books. Gold in the keirin, team sprint and individual sprint in Beijing made him the first British Olympian for 100 years to claim three golds at one Games.

He was an ambassador for London 2012, where he made further history. Having already won gold in the team sprint, he once again took gold in the keirin taking him past Steve Redgrave as Britain’s most successful Olympian in history.

Hoy retired from cycling in 2013 and has since competed in motorsport.

Clark is widely regarded as the best British driver of all time. At the time of his death – which came while competing in a Formula Two race in Hockenheim, Germany in 1968 – he had won more Grand Prix (25) and achieved more pole positions (33) than any other driver.

Clark won two Formula One World championships in 1963 and 1965 and also won the Indianapolis 500 in 1965, becoming the only driver to win both the Indy 500 and the F1 title in the same year.

Dalglish’s knighthood in 2018 means one of Britain’s sporting icons is now referred to as ‘Sir’, but to many he has always been ‘The King’.

From European Cups to every domestic honour on offer, the Scot has been responsible for orchestrating historic moments for Celtic, Liverpool and Scotland.

He scored the winning goal in the 1978 European Cup final for Liverpool, won a domestic double as player-manager in 1986, managed Blackburn Rovers to the Premier League title, has over 100 caps for Scotland, and was a part of the Celtic team that won their ninth Scottish title in a row in 1974.

“There’s no question he’s the finest player ever to pick up a snooker cue,” said World Snooker chairman Barry Hearn, in the aftermath of Hendry’s retirement.

Hendry loved to win, and he won a lot. He became the youngest-ever world champion, aged 21 in 1990, before adding six more in the next nine years. He held the world number one ranking for eight consecutive years between 1990 and 1998 and then again briefly in 2006 and 2007.

Seen by many as Britain’s greatest fighter, Buchanan was the undisputed world lightweight boxing champion of the world in the early 1970s.

He became world lightweight champion in 1970 by beating Ismael Laguna and, the following February, he defended the WBA title and secured the WBC belt by beating Ruben Navarro in Los Angeles.

The WBA crown was lost in controversial fashion against Roberto Duran in 1972 – with the feted Panamanian describing Buchanan as his toughest ever opponent.

The Scot fought at Madison Square Garden multiple times, once topping the bill with Muhammad Ali as chief-support, and was the only British fighter ever to win the American Boxing Writers Fighter of the Year. He was inducted into the World boxing Hall of Fame in 2000.