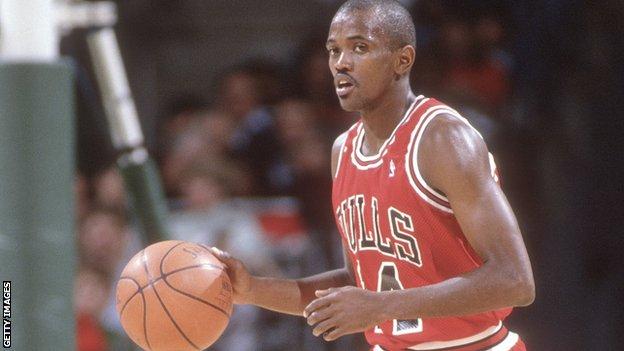 “I would have decided not to go to the bubble. At the time, the George Floyd incident was so prevalent our communities needed us to be visible – on the frontline.”

Craig Hodges hung up his basketball jersey and trainers decades ago.

But had he been playing today, the former Chicago Bulls guard says he would not have played out the season at the Disney World Resort in Orlando, Florida.

“To me, it’s a distraction to take people’s attention and eyes away from what’s really going on,” he told BBC Sport.

“I wouldn’t have gone to Florida. That’s just basketball. There’s more important things to fight for than winning a game or championship.”

Hodges is one of the best three-point shooters the game has ever seen.

Now 60, he played alongside Michael Jordan for the Chicago Bulls, and has two NBA Championship titles to show for it.

Watching this week’s player-led boycott of matches has been bittersweet for him.

Prompted by the shooting of Jacob Blake in Wisconsin, all 13 remaining play-off teams decided against playing on the original date set for their fifth match.

The NBA retrospectively supported their decision.

Hodges, who said he was proud of what the “young brothers” had done, tried to prompt a similar move nearly 30 years ago.

Hodges’ plan was to boycott game one of the 1991 NBA Championship game between his Bulls and the Los Angeles Lakers.

In March of that year Rodney King, a black American, had been the victim of police brutality in LA.

Footage of King being beaten by white officers would spark nationwide riots, with LA bearing the brunt of violent protests.

The beating left King with brain damage. The white officers involved were acquitted a year later.

Hodges remembers seeing the footage and deciding his platform was one he could use to show the anger of black people in America. And, perhaps, a chance to use his voice to open channels others might not have access to.

But he says he garnered very little support for his plan not to play the series.

“Guys were more worried about their contracts and their possible endorsement deals,” he said. “And remember, I didn’t have social media so it felt like it was just me against the world.”

There had been suggestions this year’s boycott – led by the Milwaukee Bucks – may result in the cancellation of the season.

But meetings between the NBA and players seem to have ended in agreement that playing on is the right thing to do.

“It actually made changes in the different leagues around the country,” he said. “We saw the WNBA, MLS, MLB and women’s tennis take similar action.

“So it’s already made an impact.”

Hodges hopes something “long-lasting and sustainable” will come from the protests.

Asked if he thought the NBA would have been different had his boycott succeeded, he said: “There are so many different avenues of racism within the context of systemic racist and racist systems, sport is only part of it.

“Had we been able to boycott the championship that year we may have made some differences within the league.

“On a national scale, it’s going to take more than athletes and entertainers.”