Rafael Nadal returns to Grand Slam tennis and aims to move level with Roger Federer’s tally of 20 major titles when an unfamiliar-looking French Open starts in Paris on Sunday.

Nadal, 34, skipped the recent US Open but is generally considered the favourite to win a record-extending 13th title at Roland Garros.

Federer is out with a knee injury but top seed Novak Djokovic and wildcard Andy Murray are in the men’s draw.

British number one Johanna Konta leads the nation’s hopes of its first singles champion at Roland Garros since Sue Barker in 1976.

Last year, Konta reached the semi-finals on the clay courts in the French capital.

The fortnight-long tournament is usually held at the end of May and the start of June but was postponed to this new date – a fortnight after the US Open culminated on the hard courts in New York – because of the coronavirus pandemic.

Up to 5,000 fans are set to be allowed on Court Philippe Chatrier – the main show-court at Roland Garros – although no spectators will be allowed on any of the other courts.

That is despite the French government announcing new restrictions on Wednesday which banned gatherings of more than 1,000 people because of rising coronavirus cases in France.

Players must stay in designated hotels and are only allowed to compete when they have returned a negative test for coronavirus.

Six unnamed players were withdrawn from men’s and women’s qualifying after two players and a coach tested positive.

The return of Nadal to a tournament where he is the most successful player of all time adds an extra sprinkling of star quality.

The 19-time Grand Slam champion did not play the US Open in New York because of health and travel concerns.

The world number two returned to competitive action at last week’s Italian Open for his first tournament since winning the Acapulco title in February, but was knocked out by Argentine Diego Schwartzman in the quarter-finals.

It is only the second time since bursting on the scene in 2005 that he has arrived at Roland Garros without having won a title on the European clay in the preceding weeks.

“It’s a completely special year and unpredictable year. I did a couple of things well and other things bad,” Nadal said following his Rome defeat.

“At least I played three matches. I’m going to keep working and keep practising with the right attitude and try to give myself a chance to be ready.”

Who else is playing and who is not there?

Without Federer, it is an opportunity for Nadal and Djokovic to close in on the Swiss great in their race to finish with the most Grand Slam men’s singles titles.

Serbia’s Djokovic, 33, was the hot favourite to earn his 18th major at the US Open but made a shock and undignified exit in the last 16 after being defaulted for hitting a ball at a line judge.

That meant a new Grand Slam champion would be crowned and Austria’s Dominic Thiem was the man who took advantage.

With 27-year-old Thiem having lost to Nadal in both of the past two finals at Roland Garros, few would pick a winner outside those two and Djokovic.

Djokovic, who won his only Roland Garros title in 2016, bounced back from his US Open exit by winning the Italian Open this week – meaning that infamous disqualification is his only loss in 32 matches during 2020.

As ever, the women’s singles is much harder to predict. After six of the top 10 did not play in New York some of the bigger names have returned, but not all.

World number one Ashleigh Barty won her maiden Grand Slam in Paris last year but, after missing the US Open, has again opted to stay at home in Australia because of the pandemic.

Japan’s world number three Naomi Osaka, who triumphed at Flushing Meadows, is another absentee because of a hamstring injury.

American great Serena Williams will be there as she tries to match Australian Margaret Court’s all-time record of Grand Slam singles titles.

Williams, who turns 39 on Saturday, has lost her past four major finals – at Wimbledon and the US Open in 2018 and 2019 – as she appeared burdened by the weight of history.

Can Konta replicate her run?

British number one Konta, 29, surprised many people with her run to the Roland Garros semi-finals last year, having never previously never won a match in the main draw.

Ultimately it ended in a 7-5 7-6 (7-2) defeat by Czech teenager Marketa Vondrousova, with Konta leading 5-3 in both sets and missing opportunities to close each one out.

That run to the last four came on the back of a successful lead-up on the clay, although this year’s preparations have been wildly different for Konta.

The mini clay-court season means she has only played in the Italian Open where an almost flawless opening win over Romania’s Irina-Camelia Begu was followed by a straight-sets defeat by Spain’s former French Open champion Garbine Muguruza.

Konta, seeded ninth, has also arrived in Paris without a full-time coach after a trial run with Swede Thomas Hogstedt – who helped Maria Sharapova win the French Open – came to an end.

What about the other Brits?

Andy Murray will return to competitive action on a clay court for the first time since a five-set defeat by Stan Wawrinka in the 2017 French Open semi-finals.

The 33-year-old Scot has been given a wildcard as he continues his comeback from a career-threatening hip injury.

After returning to Chatrier for a practice session this week, he said it was the “brutal” match against Wawrinka that “turned out to be the end” of his hip.

Since then, Murray has had two hip surgeries and expected the second in January 2019 – a resurfacing operation where the femur head was capped with metal and put into an artificial socket – to end his career.

Remarkably, he has been pitted against 35-year-old Wawrinka on his Roland Garros comeback.

Murray is joined in the men’s singles by British number one Dan Evans, Cameron Norrie and Liam Broady. Kyle Edmund has withdrawn because of a knee injury.

Broady, 26, came through qualifying to reach the main draw for the first time.

Heather Watson, ranked 56th, is the only other Briton joining Konta in the women’s singles after Harriet Dart lost in her second qualifying match.

In the doubles, Jamie Murray and Neal Skupski will play at Roland Garros together for the first time, while Joe Salisbury and his American partner Rajeev Ram aim to better last year’s exit in the quarter-finals. 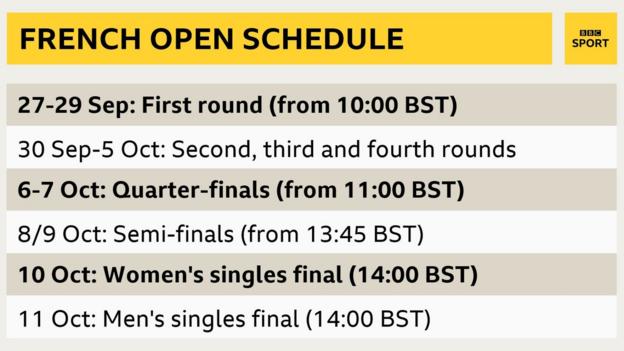