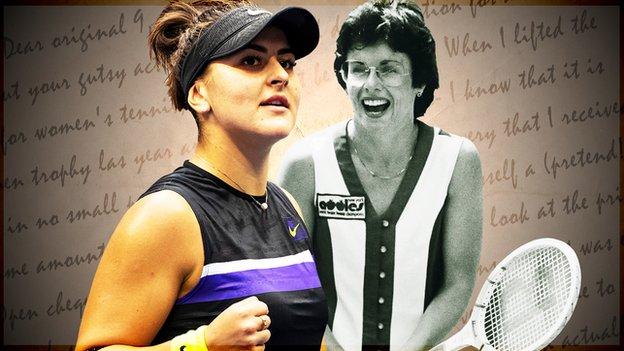 Fifty years ago, nine female tennis players – including Billie Jean King – risked their careers by signing up for a new tournament. Despite the threat of being banned from Grand Slams, they made the move to try to improve pay and opportunities in the women’s game. Their actions on 23 September 1970 eventually led to the creation of the WTA Tour, and then later equal prize money at the Grand Slams and other events, making tennis one of the most equal sports.

Without your gutsy actions, vision and determination for a better future for women’s tennis, we wouldn’t be here today.

When I lifted the US Open trophy last year and got the winner’s cheque – I know that it is thanks in no small part to you and your incredible bravery that I received the same amount as the men’s champion.

I first wrote myself a (pretend!) US Open cheque when I was 15 years old. Every year, I’d look at the prize money and, understanding the sacrifice that went into ensuring it was equal to the men’s earnings, it gave me that much more drive to continue to work towards my dream of winning the US Open. Then to go out and actually win it in 2019 was incredible. This was only possible because of the nine of you.

I was 11 years old when I learned that, in the summer of 1970, female tennis players were being paid as little as one eighth of what the men were – and sometimes even less. More than that, with fewer opportunities to play on big stages, it’s no wonder you felt like you were being squeezed out of the game you loved.

Even with the odds stacked against you, the nine of you had enough faith in yourselves and each other to sign $1 contracts with magazine publisher Gladys Heldman, another trailblazing woman in her own right, to compete in a tournament where the risk was losing your tennis careers.

It’s hard to imagine now that the male-dominated tennis establishment threatened to ban you from playing not only the Slams, but team competitions like the Fed Cup (today that is one of my favourite events to play) and strip you of your national rankings for playing in the newly created Virginia Slims Invitational tournament in Houston.

But your dreams were much bigger than rankings and Grand Slams. You set out to make sports, and in turn the world, a better, more equal place for women. Your goals were clear: That any girl from anywhere would have a place to compete. That women would be recognised for their accomplishments, not only their looks. And that they would be able to make a living playing professional tennis.

I’m so grateful to all those who made the Houston event a success and and in thanks to that, we saw the launch of the first fully-fledged circuit for women in 1971 and eventually the founding of the WTA at a meeting of more than 60 players in London, just before Wimbledon in 1973.

I’d like to think that maybe other women along the way would have done the same thing, but the point is, you took the biggest leap, you did it first, and your generation has inspired mine to continue fighting and striving for change.

Nowadays, we have more tools at our disposal, such as social media, to aid in our advocacy for what we believe in. The shift in culture and media towards providing athletes and celebrities with a global platform has allowed for meaningful conversations centred around the need for change and equality that otherwise might not have been possible.

What we saw Naomi Osaka do a couple of weeks ago, when she decided not to play a match to protest against racial injustice is incredible, as was Coco Gauff’s powerful speech at a Black Lives Matter protest to demand change.

With your experiences as an example, the next generation – my generation – of young women is taking charge, using our platforms to speak out for what we believe in and putting it all on the line, regardless of what the outcome or reaction will be. Your leadership has created a powerful platform foundation for us all to speak up for ourselves.

Billie, when I was lucky enough to meet you last year, I asked you what your greatest achievement was and you replied: “Creating equal prize money in women’s tennis.” But you also made it clear that the fight wasn’t over.

You told me that I could continue it by bringing awareness to the issues in interviews and on social media.

Equality is a work in progress and there is still so much room for improvement. If we all continue to do our part and stand up for what we believe in, things will evolve and change WILL happen. For instance, below the Grand Slams and some of the other bigger tournaments, prize money is still different and the men’s tour still has more tournaments than the women’s. I vow to use my platform and my voice to help incite this necessary change.

In any case, we owe a huge debt of gratitude to you nine remarkable women, who were ready to jump without a safety net so that girls and women like me would have the chance to dream big and accomplish things.

It was such an incredible, awe-inspiring feeling lifting the US Open trophy – and it will be again this weekend for the woman who wins the title on Saturday.

And so for that opportunity, and all of the other barriers broken along the way, I have to say thank you Peaches, Rosie, Judy, Julie, Billie Jean, Kerry, Kristy, Nancy and Valerie – and all the visionary players who followed – for making women’s tennis the international success story it is today.

Cancel reply
Ryley Batt: ‘I don’t like who I am on court – I’m not a nice guy’
Heather Watson: LTA chief dismisses concerns over running of sport