Few British sports stars have taken us on a rollercoaster ride quite like Andy Murray.

For so long – four Grand Slam final defeats spanning four years to be exact – it seemed like he was destined to be categorised as another ‘plucky Brit’. Good but not quite good enough.

Then that all changed. Three Grand Slam titles, two Olympic gold medals, one Davis Cup and a knighthood later, the Scot is revered and respected in equal measure.

As part of the BBC’s ‘Murray Weekend’, we look back on 10 of his most memorable tennis moments. And, at the bottom of the page we want you to vote for your favourite. 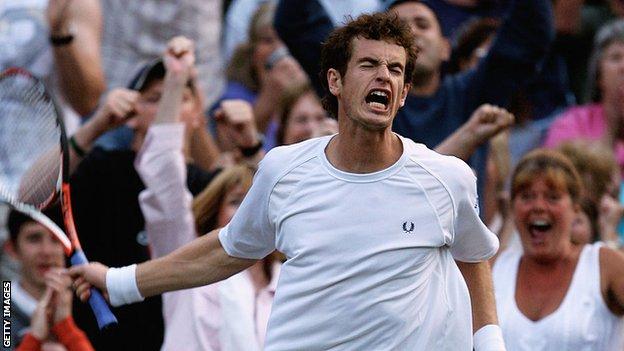 The moment where the young Murray sealed his place in the Wimbledon crowd’s affections.

The Scot, then aged 21, produced a stunning fightback from two sets down to beat France’s Richard Gasquet in the last 16, thrilling a packed Centre Court – and millions more watching at home – in the gathering gloom of ‘Manic Monday’.

“That was the best moment I’ve ever had on a tennis court,” he said afterwards. “The crowd got behind me just when I needed it and to have them behind me was a privilege.” 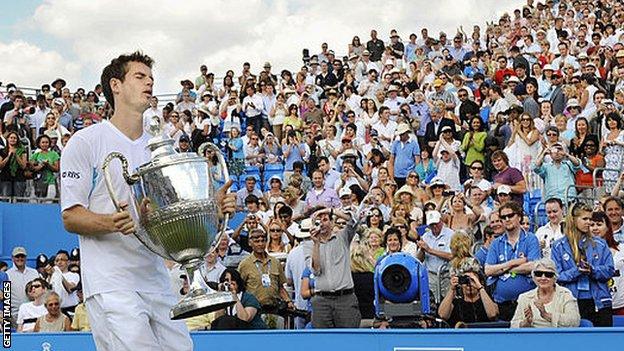 After beating Gasquet, dreams of an unfancied Wimbledon win were ended by Rafael Nadal in the quarter-finals. But Murray did not have to wait too long for his first grass-court title.

That came less than a year later when he beat American James Blake at Queen’s Club, becoming the first home champion at the west London venue since Bunny Austin in 1938.

“I was quite nervous today because no British player had won here for 70-odd years, so it got the nerves going,” said Murray. “The only thing left is to try and get a Grand Slam title in a couple of weeks.” 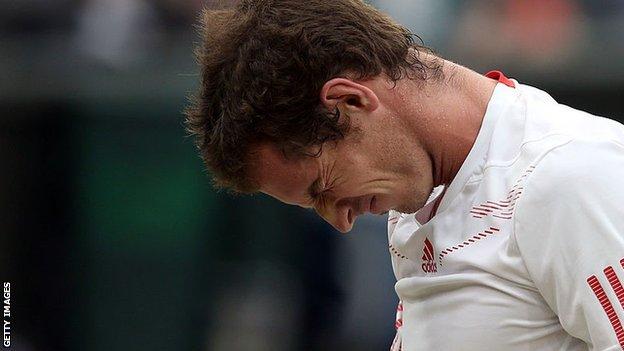 Watching as Murray’s voice trailed off after losing to Roger Federer in the 2012 Wimbledon final, it was hard not to get a lump in the throat.

Between the deep breaths and the tears, Murray joked he was getting closer to the most coveted prize in the sport. True, he was.

This was his first SW19 final after semi-final defeats in the three previous years, and his fourth defeat in a Grand Slam final.

With that outpouring of emotion, you suspected it was a moment where he felt he might never get his hands on a major trophy. And many felt the same… 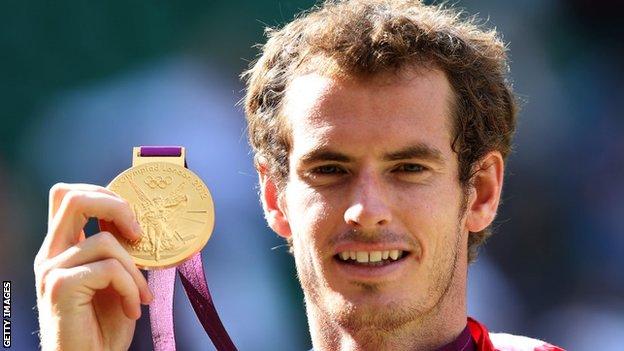 Exactly four weeks after those tears, Murray won at Wimbledon. He didn’t win Wimbledon. Rather he won next best thing in that most memorable of British summers: an Olympic gold in London.

Hours after Super Saturday, Murray made it a Super Sunday by sweeping past Federer in a remarkably one-sided final.

Not only did it provide a new bit of bling around his neck, it seemed to give him the belief he could beat the best to the biggest prizes.

“It’s number one for me – the biggest win of my life,” said Murray. “This is the best way to come back from the Wimbledon final.” 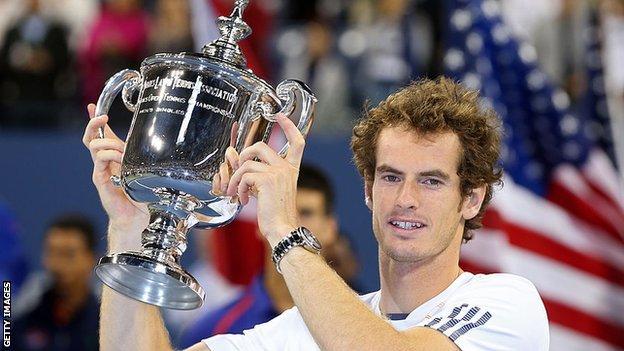 It was the British sporting summer which had given us everything. So it felt fitting that Murray rounded it off with his first Grand Slam win.

Asked what it felt like to finally emulate Fred Perry, Murray replied: “I’ve been reminded of that most days of my life for the last few years. It’s great to have finally done it and I don’t need to get asked that anymore.”

Despite the time difference, Murray’s crowning moment saw an estimated 1.5m people stay up into the early hours back home to watch, while victory was followed by congratulatory messages from UK Prime Minister David Cameron and Scotland First Minister Alex Salmond. 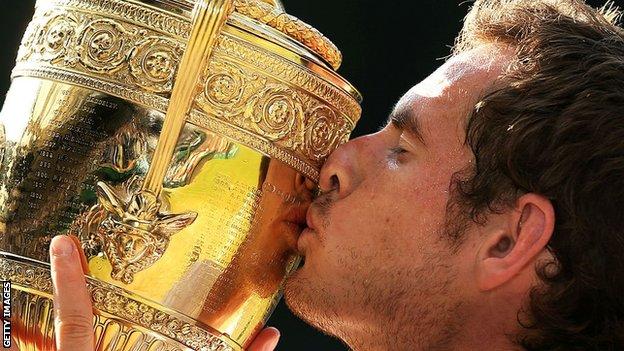 Murray winning his first Grand Slam at the 2012 US Open eased some pressure – but not all of it. The next albatross hanging around his neck was Wimbledon.

That would be the true measure of success for many British sports fans starved of home success. Not since Fred Perry in 1936 had a British male triumphed there.

A straight-set win over Djokovic suggested it was a tension-free affair. But nothing is ever straightforward where Murray is concerned.

A wobble in the third set left the nation fearing the worst, before he swung momentum back in his favour and hauled himself over the line with his fourth championship point.

Cue pandemonium on a combustible Centre Court, outside on ‘Murray Mound’ and in front of big screens – in living rooms, gardens and public squares – up and down the land. Tennis had come home. 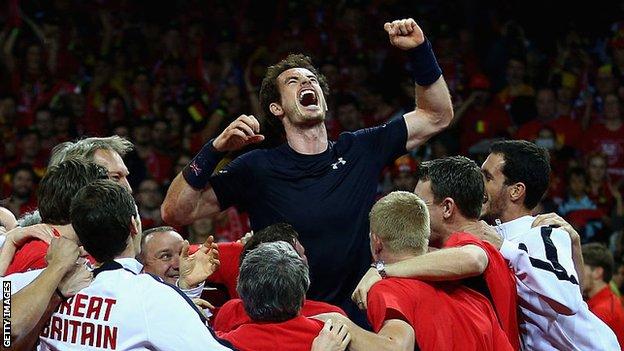 With such an intense focus on individual achievement, team events can provide a welcome change for many players. Murray flourished in the 2015 Davis Cup campaign.

Although far from a one-man team, Great Britain’s first global success in 89 years would not have been possible without the then world number two.

Murray won 11 of 12 points during the four matches, including all three rubbers in the final against Belgium.

A memorable campaign had the most memorable of finishes – and the most Murray. Digging deep to stay in a baseline exchange, he stretched for a backhand which he somehow put over David Goffin’s head and inside the line to spark a great British baseline pile-on. 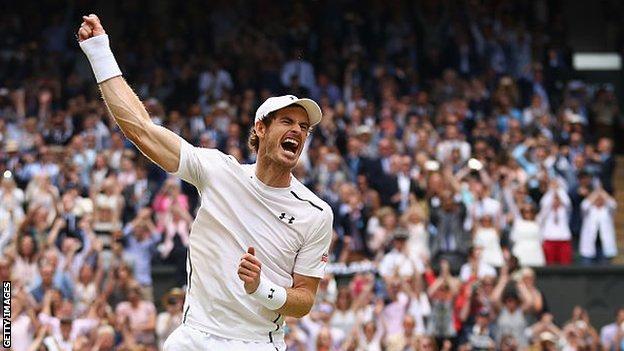 For the first time in his career, Murray walked out for a Grand Slam final as the favourite. And he lived up to the billing with a ruthless display against missile-serving Canadian Milos Raonic.

There was none of the unbearable tension on Centre Court which had been hanging in the air three years before.

Instead, Murray breezed through the tournament, dropping only two sets over the fortnight and then supremely negating Raonic’s power in a cold-blooded dismantling of the sixth seed.

After 77 years of Wimbledon hurt, Britain suddenly had two triumphs in three years to savour in the men’s singles. And with it, Murray had confirmed his place at the top table of Britain’s finest sporting talents. 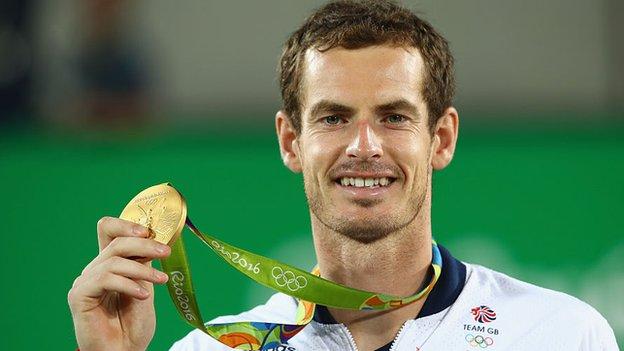 Tears, whether of joy or despair, were a regular feature of Murray’s post-match emotions by now. In Rio, like on Centre Court a month earlier, they came as the Scot sat down on his chair and the reality of what he had just achieved sunk in.

Here, he became the first player to win two gold medals in the Olympic men’s singles, fighting off Argentina’s Juan Martin del Potro in a gruelling four-hour final which left both men physically and emotionally drained.

“It was one of the toughest matches that I’ve played to win a big event, for sure,” Murray said. 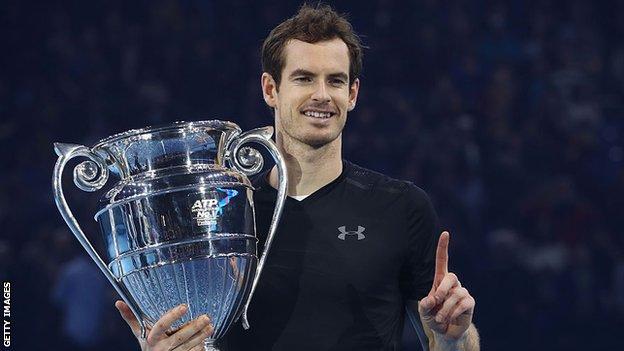 No matter what happened at the season-ending ATP Finals, it had already been Murray’s annus mirabilis.

Another Wimbledon title, another Olympic gold and an ascension to world number one for the first time were the top lines of a remarkable 2016.

A fitting end would have been success in front of a home crowd at the ATP Finals in London, sealing his place as the year-end men’s number one at the same time.

That’s exactly what he did – and in imperious fashion. Murray powered past Djokovic in the final, extending his winning streak to a career-best 24 matches and lifting his ninth trophy of the season.

If you are viewing this page on the BBC News app please click here to vote.

US Open 2020: Tsvetana Pironkova describes her return to tennis as ‘unreal’

Steven Smith ruled out of England series after first game: ‘We saw how unwell he looked’ – Langer